Vic says that this is the all time great adventure. Eventhough I get my updates via email, I can hear the excitement in his voice.

The skies were clouding over as Vic and Charlie left Radicofani, 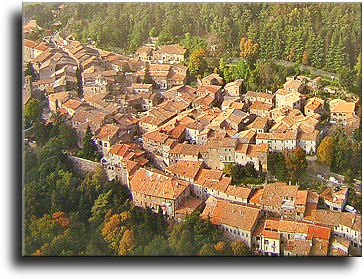 and their hiking adventure got even more exciting as the thunder and lightening began. The first several hours of this leg of their journey was spent on back country roads through farm after farm. They saw two rock pickers, one human and one mechanical. This was obviously the exciting part of hiking for hours past farms, I am guessing second only to the thunder and lightening!

Finally they hit a paved highway and they had a choice...

This next part of my dad's email is a little harder to decipher.. "So far so good until the down power"...

They then seem to have hitch hiked (cheaters) and "Problem! the road on the via Franchigeno turned off on a dirt path about 1 K after pick up!"

Charlie brought the map, and selected a town on the edge of the map! They were thinking that if they got there they could find a hotel and rest up for the night. The driver's English was not good and their Italian was not much better.

Oh yes dad! I can see that this is becoming the all time great adventure! It gets worse...

As they approached the town (small village ) they realized they were in trouble but got out of the car with a slight fear in their hearts...

Vic writes, "We went to the very first house on the street. My idea was to ring the door bell. Something I learned from Patricia on the Camino was to be prepared to ask. Just our luck the gentleman spoke negative 1 English, and Charlie forged on with the most humorous conversation yet.

The jist was...what would it take to drive them to Aquapendente? Charlie took over as he warmed up, and yes he drove them the 20 k!

It was still raining as they stopped at the first snack bar for a coffee. They waited most of the rain out then headed for the B&B listed in the guide book. The proprietor arrived as they arrived and as they settled in, they waited for the usual late dinner.